The Critical First Steps of a Smart Manufacturing Transformation -- Spoiler alert: It’s not About Selecting Technology

This blog is a MESA Member Point of View

When Trelleborg Group set out on its Smart Manufacturing journey, it found technology wasn’t the problem so much as it was people’s understanding of the technology. The operations technologists (OT) in the manufacturing facilities thought they were ready to embark on a digital transformation, but the company’s information technology (IT) leaders disagreed. Bridging this gap became the first order of business, said Tomas Norbut, IT Infrastructure and IoT program manager, at MESA’s North American Conference.

Norbut explained the disconnect as follows: “There’s a gap in knowledge between understanding that your processes could be very, very mature, but the abilities to digitize those processes can be very, very immature,” he said. That’s true even when the company has a well-developed, mature manufacturing program, as Trelleborg does.

However, as part of a decentralized company of about 120 facilities in 47 countries, each facility was at a different stage in the understanding of, and ability to launch a Smart Manufacturing transformation. With each facility eager to move forward, the challenge was translating this broad desire to adopt Smart Manufacturing into practical, actionable plans company-wide.

The company’s product and market diversity—it makes rubber-based components in a wide variety of sizes for a wide variety of markets, from O-rings. seals and gaskets to bumpers on docking platforms—compounded the challenge.

To get everyone to understand the task at hand, the company started by categorizing the topics that comprise Smart Manufacturing, to build a common vision of what it means to digitize. The company adopted the term “Production Intelligence” (PI or ) to encompass the terms otherwise known as Smart Manufacturing, Industry 4.0, Industrial Internet of Things, etc., and to create a common framework. 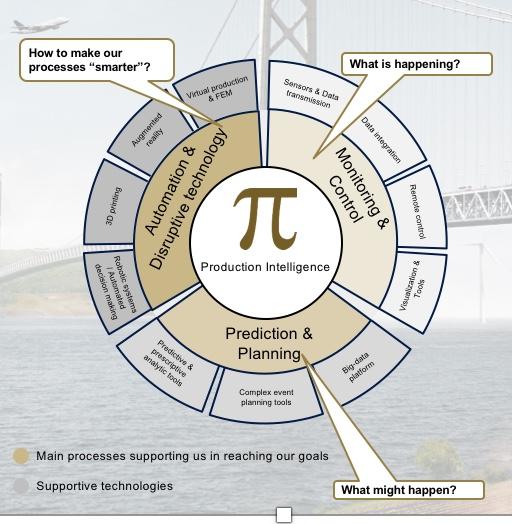 With PI, the company sought to capture and communicate all the topics within a smart manufacturing environment, and to organize them as follows:
Monitoring and controlling–What’s happening?
Prediction and planning–What might happen?
Automation and disruptive technology–How can we make our processes smarter?

Norbut acknowledged that the list of technologies might seem to be a collection of buzzwords, but said the visualization serves as a way for the company to work toward a common understanding of the concepts.

Next, Norbut worked to establish a common view of Smart Manufacturing maturity levels. He chose an existing framework from RTWH Aachen University. The maturity model tracks maturity starting “at a very basic level with computerization, and then moving up the chain to connectivity, visibility, transparency, predictive capacity and adaptability.” 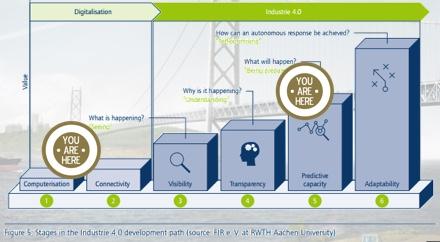 Again, he noted that the goal wasn’t to create a perfect visualization, but rather a common one, so each company facility could understand at what maturity level it is, and could work toward moving to the next level.

Once a reference maturity model was set, Norbut and an outside resource created a web-based survey that each facility completed to establish its individual starting point. The goal, said Norbut was simple: “Let’s just find out what our capabilities are, what our capacity is to have more digitization and more intelligence.” he said. “We just wanted to understand, first of all, what capabilities do you [the facilities] have, then benchmark those capabilities that you say you have verses what we should be seeing in a digitization journey.”

The results, Norbut said, “really opened up the operations people’s eyes that there is this gap between operation processes maturity and digitization maturity.” Among the findings:

One of the findings helped Norbut more deeply understand the company culture. He hadn’t realized that 61% of the sites are run by fewer than 100 employees, which, combined with the company’s decentralized decision-making process, means that “They’re used to running their own small business, and to thinking in small business types of solutions, not corporate type solutions.”
After reviewing the survey results, Norbut concluded: “We’ve got some capabilities we could really start working with, but we need to get organized at how we do this.”

“The execution is going to come out of leveraging our current organization, the manufacturing excellence team, and bridging that with the IT organization,” Norbut said. The plan, he added, is “to set out the basic framework by which we’re going to start and, then giving people the incentive to move forward.”

The plan also calls for identifying external resource that can help, but with the goal of learning from them and then having staff take over.

Beyond that, Trelleborg’s next steps, said Norbut, “seem to be very logical.” He described them as follows:

Moving forward, each Trelleborg facility will essentially embark on its own PI journey, selecting and funding its projects, in keeping with the decentralized culture of the company. However, every facility will proceed within the company-wide understanding of the PI maturity levels, ensuring that they all move together toward achieving a common PI vision.

Patricia Panchak is an independent business and technology journalist, editor and public speaker. She can be reached at ppanchak@roadrunner.com.