The latest release of B2MML from MESA International includes a JSON Schema specification of the ISA-88 and ISA-95 standards.  JSON (JavaScript Object Notation) a lightweight data-interchange format that is easy for humans to read and write and is easy for machines to parse and generate.  See www.json.org for information on JSON.  It is an open standard for data exchange that is made up of attribute value pairs and array data types. JSON is language independent but uses conventions that are familiar to most programmers that know C, C++, C#, Java, JavaScript, Perl, Python, or any similar language. JSON is a lightweight alternative to XML and is often used in mobile applications and in Perl Python, and JavaScript applications.

JSON Schema is a grammar language for defining the structure, content, and (to some extent) semantics of JSON objects. See www.json-schema.org for information on JSON schemas.  Schemas specify metadata (data about data) about what an object's properties mean and what values are valid for those properties.  B2MML-JSON is derived from B2MML XSD definitions, using XMLSpy2021 from Altova (www.altova.com).  B2MML-JSON is a complement to the B2MML XML format and will remain in sync with any changes to B2MML and ISA-95.  JSON is typically used with REST based message exchanges, and XML is typically used with web service (SOAP) based exchanges.

The B2MML-JSON schema definition includes all the transactions specified in ISA-95 Part 5, providing one of the first standard syntax for fully qualified JSON message transactions. JSON messages can be exchanged using the ISA-95 Part 6 Message Service model, and the associated implementation OpenO&M implementation. The OpenO&M ISBM (Information Service Bus Model) defines both a web service and a REST interface specification to message exchange systems, and supports the exchange of XML and JSON messages. See www.mesa.org/en/ws-ISBM.asp for more information.

This is the first release of B2MML-JSON and it includes all BatchML and BatchML-GeneralRecipe elements.  The current B2MML-JSON has all elements in a single file (rather large), but the MESA B2MML committee is looking for feedback from users on the best way to partition and organize JSON Schema files.  B2MML-JSON users are encouraged to pick up B2MML V7 from the MESA web site at http://www.mesa.org/en/B2MML.asp.  B2MML V7 is also available on Github at https://github.com/MESAInternational/B2MML-BatchML. 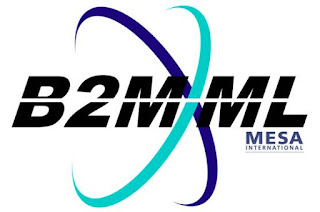 Bio:
Dennis Brandl is the Chief Consultant for BR&L consulting, specializing in Manufacturing IT and Flexible Manufacturing solutions.  He has been involved in MES, batch control, and automation system design and implementation in a wide range of applications over the past 30 years.  Dennis is an active member of the ISA 95 Enterprise/Control System Integration committee, the ISA 99 Cyber System Security committee, and the IEC/ISO Smart Manufacturing Working Group, and a regular contributor to industry magazines.  Mr. Brandl has a BS in Physics and an MS in Measurement and Control from Carnegie-Mellon University, and a MS in Computer Science from California State University.