Authored by Dennis Brandl, a member of MESA International

MESA International just announced the release of Version 7 of the widely used B2MML and BatchML specifications. Version 7 brings the ISA-95 and B2MML specifications completely in sync.  The extensions that were in B2MML because of user requests have been incorporated into the ISA-95 2018/2019 releases, and B2MML was updated to match new models added to the ISA-95 standards.  These include a complete test model for materials, personnel, equipment, and physical assets, linked to operations requests and work requests.  This B2MML version also adds spatial location information to all resources, allowing tracking of remote equipment, personal, and stored material.  The ISA-95 work calendar model was added to B2MML to allow the exchange of shift definitions, vacation specifications, and other calendar related events.  A standardized error message was added to B2MML, simplifying integration projects, and providing better debugging of integration problems.

One major addition in B2MML V7 are Operations Events, a new model in ISA-95 that supports event driven architectures. Event driven architecture are often applied to integration of systems made up of loosely coupled software components and services, a target market for the B2MML specification.  B2MML V7 supports the definition of event classes, and then the exchange of event information as operations events occur.

Because of the changes in the ISA-95 specification, B2MML V7 is not fully backward compatible with Version 6, but the changes are minor. These include the new Testing Model and changes to a few attribute names, mostly related to Hierarchy Scope and Locations.  B2MML users are encouraged to pick up B2MML V7 from the MESA web site at https://www.pathlms.com/mesa/courses/26161. 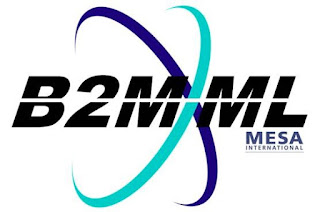 Bio: Dennis Brandl is the Chief Consultant for BR&L consulting, specializing in Manufacturing IT and Flexible Manufacturing solutions.  He has been involved in MES, batch control, and automation system design and implementation in a wide range of applications over the past 30 years.  Dennis is an active member of the ISA 95 Enterprise/Control System Integration committee, the ISA 99 Cyber System Security committee, and the IEC/ISO Smart Manufacturing Working Group, and a regular contributor to industry magazines.  Mr. Brandl has a BS in Physics and an MS in Measurement and Control from Carnegie-Mellon University, and a MS in Computer Science from California State University.
at 12:47 PM

Email ThisBlogThis!Share to TwitterShare to FacebookShare to Pinterest
Labels: B2MML