Even though the demand for the platinum group metals (PGM) grew roughly 10 times over the last 40 years, the price remained the stable.  This forces organisations to focus on asset management with specific attention to the measurement of utilisation and performance of assets.

In the article titled Asset Performance Management: Proposing a Conceptual Model to Apply OEE to a Continuous Process a conceptual model was presented.  This article follows on that and the objective of is to test the proposed model with actual results and prove the validity thereof.

Technology improved significantly since the days of manual data capturing and data of this importance should leverage off of the technology improvements (Muchiri and Pintelon, 2008; Ljungberg, 1998; Dal et al., 2000; Kullh and Josefine, 2013; Jonsson and Lesshammar, 1999).  Bearing this in mind, the first set of data needed was an indication of whether the concentrator was running or not.  A single, vital piece of equipment was identified and used for this metric.  If the mill was both running and consuming a certain amount of electricity as indicated by the plant historian, the plant was running.
When the plant was not running, a selection screen was presented to the operator.  The operator could then select a downtime reason from a prepopulated list and the times were allocated to a certain bucket, as presented in Figure 1.  At the end of a time period, time buckets were aggregated and availability was calculated:

For the same time period the Actual Mill Feed Rate used in the Performance calculation was sourced from a SCADA system and averaged over the amount of hours that the concentrator was actually running.  This provided the actual hourly feed rate used in equation 2.  The Average of Top 6 Hourly Feed Rates was calculated from historical data and was is seen as the nameplate performance of the concentrator as used in equation 2:

To calculate quality, the daily activities of metallurgists were focussed on.  Each day metallurgists monitor and adjust certain metrics to ensure a high quality output. If all of these values are in range, metallurgists are somewhat convinced that the quality of the product will be high.  Historical data was analysed and a range for each metric was set up.  A metric scored 100% when it operated in the specified range and deviances from the range decreased the value thereof. Table 1 lists the scores associated with the deviances.

Data was collected over a time period north of two years and it involved seven concentrators, but data for the first half of 2014 were excluded from the results due to the notorious five month strike in the industry during 2014. The collected data was then analysed, aggregated and fed into the model presented.
It is important to note that the figures used in this report are distorted figures due to the sake of confidentiality.  The concepts, however, remains truthful. 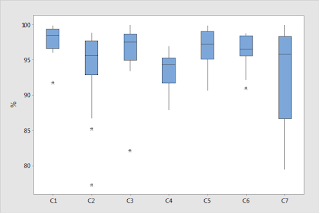 Figure 2:  Boxplot of the availability metric

Figure 2 shows boxplots for the availability metric and confirms the heterogeneity of concentrators.  Upon inspection C7’s wide spread was attributed to erratic breakdown patterns and a process which was not under control.

It is noted that one of the concentrators occasionally performed above 100%.  Although this is possible, it is not recommended as per asset management guidelines. 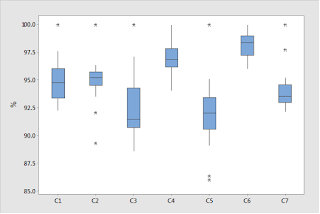 Figure 3:  Boxplot of the quality metric

Again, the quality metric confirmed the heterogeneity of concentrators and the indication is that the quality of the product was largely dependent on the type of ore fed into the concentrator.

Not surprisingly, OEE indicated that each concentrator operated within a narrow band but compared to other concentrators, the spread is wider ranging between 45 and 80%. The trend in Figure 5 clearly shows a spike in data and upon inspection, it was learned that the performance spiked when the concentrators started up post the five month long strike. 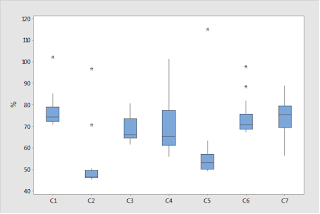 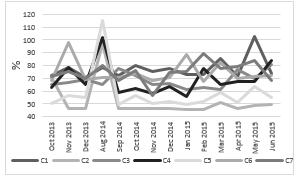 The previous article highlighted the importance of engineering asset management strategies and data integrity and importance was highlighted earlier.  As per literature, data was collected electronically, classified by human intervention and thereafter calculated and presented in the OEE model.

The model to measure asset performance was tested in this article.  A sensible calculation for the availability metric was used where after a new performance metric as offered was tested.  Finally, a new way of measuring quality in mining concentrators were tested.  All three metrics held true and proved to be useful in measuring the performance of assets.
The model proposed in the previous article offers a bird’s eye view on the concentrators and reports on the overall effectiveness and maintainability of assets.  It is proved that the model is valid and should be used by concentrator management to operate more effectively.

Kullh, A. & Josefine, A. 2013. Efficiency and Productivity Improvements at a Platinum Concentrator. Masters of Science in Mechanical Engineering, Chalmers University of Technology.

AUTHOR BIO:
Antoine obtained his bachelor’s degree in industrial engineering from the University of Pretoria in 2006.  Post studies, he started his career in consulting where he quickly got awarded the responsibility and accountability for the management and delivery of large projects for key clients.  Currently, he is a specialist in his field with responsibilities ranging across the entire value chain of the mining and processing industry.  He furthermore completed his master’s degree in engineering, with focus on Engineering Management in 2015 and is currently working at Lonmin Plc in Marikana, South Africa.